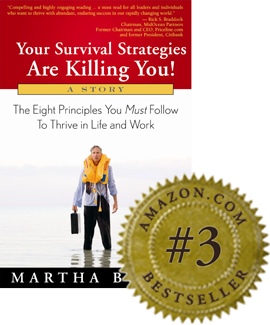 As a senior VP at a multi-billion-dollar corporation, I was used to a fair measure of professional success. But in the summer of 2006 I found myself in an interesting new place. I was being described not as an asset, but a liability. A waste of talent. A disappointment. A bad investment.

A worsening relationship with my boss, a major feud with a co-worker, and a divorce had created an extremely negative frame that brought me, eventually, to the edge of unemployment. No longer the superstar of the group, I was placed on a 90-day performance plan that was a clear first step toward being fired.

Fortunately, part of my penance was personal weekly coaching from Martha Borst. It was the beginning of one of the most impactful professional, and personal, mentoring relationships of my life. As a direct result of working with Martha, I am happy to say that not only did I keep my job, but I was able to get my division’s nomination for the highest award in our organization – in the same year I was on probation. Not something I would recommend as a goal for anyone, but truly a testament to both Martha’s coaching and the ability to change your own destiny if you are truly willing.